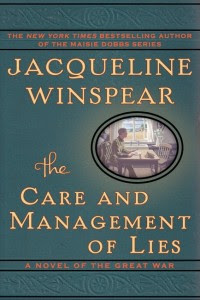 Jacqueline Winspear is best known for her series of Maisie Dobbs novels, about a female private investigator in London during WWI. I love all of the books, and I look forward to catching up every year with Maisie and the gang.

This year, Winspear has written a stand alone book, also set in WWI England. The Care and Management of Lies introduces us to Thea and Kezia, two young women who met at Camden School for girls and became best friends.

They both became teachers, and Kezia fell in love with Thea's younger brother Tom and married him. Kezia left teaching to become a farmer's wife, which was a big change from her life as a pastor's daughter.

Kezia didn't know anything about being a farmer's wife, but she impressed Tom with her hard work and diligence in learning her farm duties and how to cook for the farm workers and her husband. She studied Tom's mother's recipe books, and gradually gained enough confidence to experiment with herbs and new sauces.

Thea lived in London where she taught at a private school. She became politically active in the suffragette movement, and when it looked like England was going to get involved in the war in Europe, Thea became involved in the peace movement.

She handed out fliers and attended rallies. But pacifism was not a popular approach in a country that was becoming more patriotic about supporting the war cause. When Kezia visited Thea, she began to fear her sister-in-law's new strident views. Thea saw her friend as becoming too complacent.

Soon it became clear that Tom would have to volunteer to join the army, and so he left Kezia and few of his workers to run the farm. Tom ran afoul of a sergeant whose strategy was to pick on one soldier and make everyone in the unit turn against the soldier as a way to build troop loyalty. Tom became that soldier, and things became very difficult for him.

His saving grace were the letters Kezia wrote him, describing in great detail the meals that she made for Tom. She made it seem as if Tom were right there, and soon the entire unit begged Tom to read the letters aloud.

Kezia didn't tell Tom all that was happening at the farm; she didn't want Tom to worry. And Tom's letters to Kezia didn't mention the horrifying conditions in France- the rats (which are described in terribly vivid and awful detail), the bad food, the fighting and losing so many men.

If you enjoy reading about food, this book is for you. Reading about Kezia's cooking is a fascinating look at the evolution of a cook at that time; the foods they ate, and the inventive recipes that Kezia created are so vivid, you can almost taste them.

I wasn't sure that I would like this book without Maisie, and while it took me awhile to become involved, I fell in love with these characters. Kezia is such a strong woman, I admired her ability to grow and take on new responsibilities. Tom is an honorable man, and when he gets into a jam, the scene where it is resolved is as tense as any great thriller novel. I was biting my nails.

Thea grew as well, taking what could have been a bad situation and owning it, making the lives of those around her better. All of these characters face great upheaval in their lives, and they deal with that with grit and grace, I wonder if modern day characters would fare as well.

Fans of the Maisie Dobbs series will enjoy these new characters in a familiar setting, and it's depiction of strong women is inspirational. Winspear has done it again.

Posted by (Diane) bookchickdi at 7:51 AM