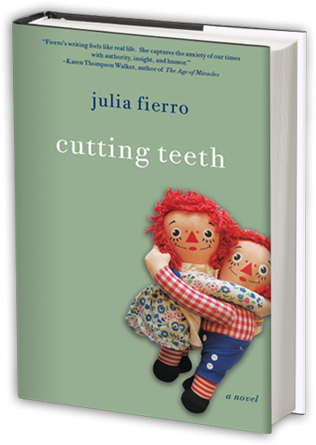 When I began reading Julia Fierro's debut novel Cutting Teeth, I thought it was going to be a novel about a bunch of whiny, overprotective, rich, Brooklyn parents and their spoiled (yet gifted or challenged) children. I didn't see how I could relate.

Then as I read the book, I saw how Fierro brought these characters I probably would not befriend to vivid life in her novel. It begins with something I wish more multi-character novels would have - a chart explaining the who the characters are and how they relate to each other. This is so helpful when you begin a book, and if a book is as well-written as this is, you find you don't need it to keep track of the characters, you are invested enough in them to know who is who.

They came together as a playgroup for their four-year-olds. Nicole, who has OCD and is afraid that the world is coming to an end this Labor Day weekend, has invited the four other couples and their children to her parents' Long Island Sound vacation cottage. Nicole's husband is rapidly tiring of Nicole's OCD behavior and her fears, her constant monitoring parenting of message boards, and has trouble relating to their son Wyatt and his behavior issues.

Leigh comes from a wealthy family who has lost much of their fortune in the economic downturn. Her husband works for her family's business, so their livelihood is in jeopardy, which causes Leigh to do something that could cost her everything she holds dear. Her son Chase may be somewhere on the autism spectrum, and she has pinned all her mothering hopes on her baby daughter, who was conceived in vitro.

Rip is the stay-at-home daddy in the group. He is an earth father, making his family organic homemade foods and loves caring for his son Hank, who is shy and wants to dress like a princess. He wants another baby but his wife refuses to consider it. She has a difficult time relating to Hank and Rip.

Rip is attracted to Tiffany, who runs a music class for children and whose daughter Harper, the only girl in the group, is a Queen Bee. Harper orders the boys around and expects them to do as she tells them. Tiffany likes to stir up trouble in the group, and when we get her backstory we see why.

Susanne and Allie have twin boys, Levi and Dash, and Susanne is now hugely pregnant with another baby. Allie is an artist, a photographer, and Susanne has started a home business renting strollers and car seats to parents. Their relationship is strained at the moment.

Maybe the most interesting person in the novel is Tenzin, a Tibetan political refugee who fled her home country leaving behind her loving husband and three children. Tenzin is nannying for Leigh, and Tiffany is trying to bully Leigh into sharing Tenzin with her. Tenzin loves and understands the children and seeing these people through her eyes in a brief chapter is interesting. I wish we had more chapters narrated by her.

There are tensions, sexual and otherwise, among the parents and between various couples, and anyone who has vacationed with a big group may recognize these scenes being played out. The weekend culminates in one big uncomfortable scene where the underlying problems bubble to the surface and explode.

Cutting Teeth is a character study of contemporary parenting in an urban setting. The competitiveness of getting your child into the right preschool, maintaining a expensive lifestyle, trying to sustain a marital relationship in the midst of all this, making friends, and the helicopter parenting that has led to children being labeled and over scheduled is all examined in this terrific novel that fans of Tom Perrotta's Little Children will enjoy.

Posted by (Diane) bookchickdi at 2:12 PM