Two Books That Transport You To A Different Place and Time

One of the great things about books is that they can transport you to a completely different place and time, a place you can visit right from your chair. Sara Gruen’s novel, “At The Water’s Edge” and Judy Blume’s “In The Unlikely Event” are two of those books.

Gruen’s best known for her hugely popular book from a few years ago, “Water For Elephants” that was made into a movie with Reese Witherspoon. Set during the Depression, it was a love story set in a circus, and it is one of those books that you will find featured prominently in new and used bookstores. 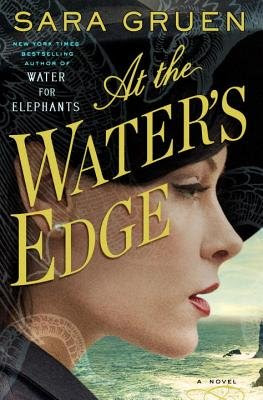 “At The Water’s Edge” is also set in the past, mostly in Scotland in 1944. Maddie is married to Ellis, the son of a wealthy family from Philadelphia. Ellis, Maddie and their best friend Hank spend their days and nights and Ellis’ family money going to parties and getting drunk most nights.

Maddie’s mother had a questionable reputation, and Ellis’ mother has not made Maddie welcome in her family. Maddie and Ellis are spoiled, with maids and cooks to care for their every need.

Of course Maddie and Hank tag along, even though Scotland is in the middle of WWII, with bombings from the Germans a frighteningly common occurrence and rationing of food in effect. They are so oblivious it never occurs to them that this is a bad idea.

They end up in a small Scottish town at an inn run by a gruff man who is not happy see these spoiled Americans show up on his doorstep expecting to waited on hand and foot, as if at a five star hotel.

Over the course of their stay, Maddie becomes involved with the people who work at the inn, while Ellis and Hank spend their time drinking and trying to find the monster. Maddie begins to see how little character Ellis and Hank have, how cruel they can be to anyone they consider beneath their station, even her.

Watching Maddie evolve and grow over the course of the story, becoming a stronger, more caring woman gives “At The Water’s Edge” its heart, and she is an unforgettable character. I liked “At The Water’s Edge” even more than “Water For Elephants”, I found it to be a deeper, richer story and I highly recommend it.

Judy Blume, known mostly for her classic children’s books, bases her new adult novel “In The Unlikely Event” on events that occurred in her hometown of Elizabeth, New Jersey in 1951-52 when she was a teenager.

In the space of less than two months, three passenger planes crashed over the city of Elizabeth, killing many. Blume brilliantly takes this true story and we see how the crashes affect the people of the city.

She includes real characters and adds her own, and we see the story mainly through the eyes of teenage Miri, who lives with her single mother (she never knew her father) and her loving grandmother.

Miri is going through all of the usual teenage angst, meeting her first love, hanging out with her best friends, when the first plane crashes. Miri sees it happen, as the plane nearly crashes into the school where she is at a holiday party.

The crash stuns the city, and when a second plane from Syracuse crashes near a school, crazy conspiracy theories begin to be discussed. Some teens have heard that aliens are crashing the planes, looking for children to abduct.

When a third plane crashes, just outside an orphanage, there are survivors and Miri’s young boyfriend is a hero who rushes to save people trapped in the plane.

Blume does an amazing job creating her story around the real events. Through Miri and her friends and family we see how these events frighten people, making them uneasy. Given the unsettled nature of today’s world, with terrorism on the rise, “In The Unlikely Event” , although set in a simpler time, can feel contemporary.

But Blume’s theme here is a good one, as spoken by Miri’s mother to Miri when Miri expresses her fear of flying. She tells Miri “you don’t want your fears to limit your possibilities”. That is good advice indeed, and “In The Unlikely Event” is a book worth waiting for from Judy Blume.

Posted by (Diane) bookchickdi at 9:39 AM