Welcome to the Friday 5ive, a weekly blog post featuring five things that caught my attention this week. I can't believe it's Friday already, this week flew by. It does not bode well for everything that I have to get done before the holidays.

1) Bryant Park opened up their Winter Village on Halloween, which is crazy. They have a skating rink (less crowded than the Rockefeller Center rink FYI), a huge restaurant, and dozens of popup shops for holiday shopping. There's lots of small mom and pop shops there where you can find unique gifts. At least the Christmas tree isn't up yet.

2) Our Sign of Week from Olive & Bette perfectly sums up all of our feelings now that we turned the clocks back. (Shout-out Simon & Garfunkel) 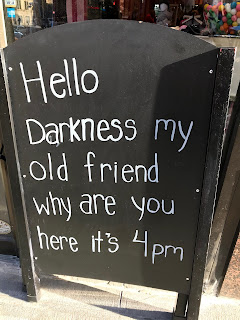 3) We attended a gala this week and were pleasantly surprised to see that the Chiffons and the Shirelles were each singing some of their hits. I did video it, but there was too much ambient noise. The original lead singers from each group were still with the group and the ladies sounded wonderful. The Chiffons sang One Fine Day, He's So Fine, and Sweet Talkin' Guy. The Shirelles sang Soldier Boy, Mama Said and one of my all-time favorites Will You Still Love Me Tomorrow.


4) I watched Mindy Kaling's movie Late Night on Amazon Prime on my Echo Show while I was making dinner one night. Mindy plays a young comedy writer who lands a job at a late night talk show hosted by Emma Thompson. Emma's character is a horrible boss who treats her writers terribly. It's funny and has a lot to say about people in power. I also liked that so many women worked on this project, both in front of and behind the scenes. Bravo Mindy Kaling. You can watch the trailer here. 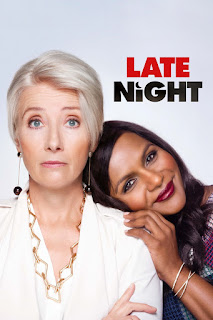 5) I read two books in three days- Amor Towles A Gentleman In Moscow, (yes, I know, I'm late to the party) a novel about a man forced to live his out existence within the walls of the Metropol Hotel in Moscow for his transgressions against the state. It is a masterpiece of writing. 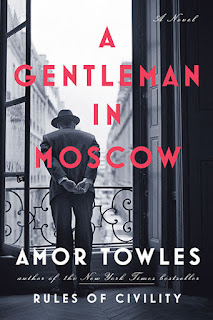 I read Jeannie Gaffigan's memoir When Life Give You Pears, about the time two years ago she had a pear-sized brain tumor and the effect that had on her family of five young children and her husband and work partner, comedian Jim Gaffigan. It's harrowing, and moving, and yes, at times, funny. I read it in one day, I couldn't put it down. I met Jeannie at our ArchCare Gala in 2017 and had a lovely hour long conversation about family with her. You would never have known what she had gone through just months earlier. She is amazing. I'll post a full review of the book soon. 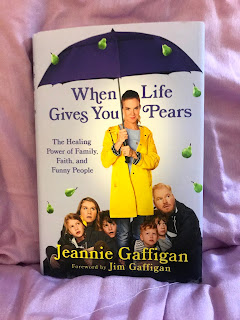 An update- I saw the balloon guy again on the street and he had an even bigger batch of balloons, plus a stuffed animal. Way to go man.

Let the countdown to Thanksgiving begin!

Posted by (Diane) bookchickdi at 5:50 PM

Labels: A Gentleman in Moscow, Amor Towles, Friday 5ive, Jeannie Gaffigan, The Chiffons, The Shirelles, When Life Gives You Pears