The Other Windsor Girl by Georgie Blalock 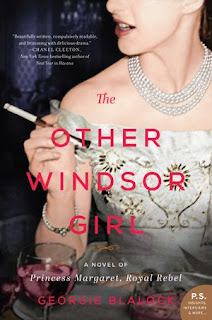 The British royal family has fascinated us and inspired countless biographies, historical novels, TV series and movies. Much is known about such royals as Henry VIII and Queen Elizabeth. A less well-known royal, Elizabeth's sister Princess Margaret,  is the star of Georgie Blalock's intriguing historical novel, The Other Windsor.

The story is told through the eyes of the Honorable Vera Strathmore, a woman who tragically lost her fianceé in WWII. Vera's family has lost much of their land fortune, as have many others after the war. To earn a living, she writes romance novels under a nom de plume to maintain her anonymity.

One day in 1949, Vera's cousin Rupert informs her that Princess Margaret would like to meet the author of the sexy novels, and soon Vera finds herself at one of the underground parties with Princess Margaret's group of friends, called "the Set".

Margaret takes a liking to Vera, who becomes a member of the Set. She learns that Margaret likes to drink, sing, and gossip. She is fashionable, likes risque language, and smokes too much. She can be imperious, and even mean, to anyone who dares to cross her.

You'll see that Princess Diana was not the first royal to be hounded by paparazzi, as Margaret was constantly followed by photographers. Whereas her sister, the future Queen, was married and settled, Margaret was the interesting one, single and out to have a good time.

She was close to father, the King, and if anyone wanted to get something in his ear, speaking to Margaret was a good place to start. When her father died, Margaret was devastated, but her grief was not acknowledged. Her mother would no longer be Queen, while Elizabeth was soon to be coronated Queen, so all the attention went to them.

Vera soon became Princess Margaret's second lady-in-waiting, changing their relationship. Now Vera was an employee. She gave up her writing career, and the man she loved, hoping that this career move would help her achieve her dream of moving to New York.

There are some wonderful scenes in the book. One takes you inside the coronation of Elizabeth as seen through Vera's eyes, and another powerful scene occurs when Margaret asks her sister the Queen for permission to marry the much older recently divorced man she has fallen in love with.

Margaret was unlucky in love, first with the married man, and then with a photographer whom Vera feels treats Margaret badly.

Fans of Netflix's The Crown will devour this captivating novel. It has resonance today, as we see a new generation of royals, William and Kate and Harry and Meghan, whose every move is endlessly discussed and documented.

Immediately after finishing The Other Windsor, I went to Google Princess Margaret to read more about this fascinating woman. It's always a sign of a good book when I want to know more.

Thanks to TLC Tours for putting me on Georgie Blalock's tour. The rest of her stops are here: