Atlas of the National Parks by Jon Waterman 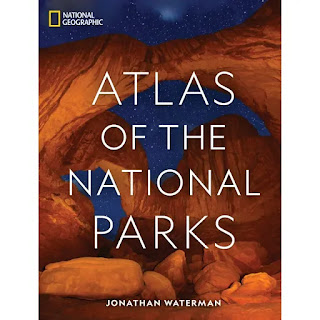 If you are a fan of our country's National Park system, National Geographic has published the perfect book for you. Their Atlas of the National Parks by Jon Waterman is a lush coffee table book designed to please the outdoor traveler.

It begins with a overview of the National Parks system, starting with the creation of the National Parks Service in 1916 signed into law by President Woodrow Wilson.  This beautiful book has over 200 maps, photos, and illustrations. History buffs will enjoy the many old photos and maps that show the parks as they were. Science fans will be attracted to the topographical maps and information about the flora and animals found in the parks, and art majors will love the  historical paintings that feature the parks.

There are so many interesting facts here, like the top fifteen most visited parks (did you guess that the Great Smoky Mountains Park is number one with more than 11 million annual visitors?). The Extremes Map has lots of trivia - the oldest park (Yellowstone, established in 1872), the only park south of the equator (National Park of American Samoa), and the smallest park by area (Thaddeus Koscuiszko Park in New Jersey is .02 acres).

The sections are divided up by region- from the Eastern Coast & Forest Parks to Alaska & Hawaii Parks. There are fun facts interspersed in each section that you can use as ice breakers at a party- Cadillac Mountain is the highest peak on the Atlantic Coast, and from October to March is the first place in America to see the sunrise, and Butch Cassidy's gang hidout in Canyonlands National Park in the rock walls there known as Robbers Roost.

Of course the photos are stunning, as one would expect to find in a National Geographic publication. You'd swear some of them were paintings- like the photo of the Grand Teton National Park, Bear Lake in the Rocky Mountain National Park, and Snug Harbor Park in Isle Royale National Park- they look so breathtaking.

After extensively covering 32 of the largest and most popular parks, there is a section that gives an overview of the smaller and lesser-known parks, like Mesa Verde in Colorado, Cuyahoga Valley in Ohio, and Virgin Islands National Park.

Atlas of the National Parks is a comprehensive look at some of the most beautiful places in our nation. If you have someone on your holiday gift list who has visited some of them or always wanted to visit them, give them this beautiful book.

Thanks to TLC Tours for putting me on this tour.