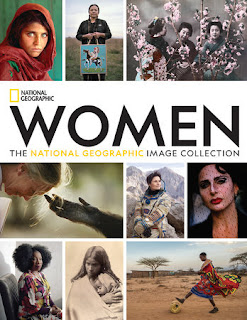 The book is divided into six chapters- Joy, Beauty, Love, Wisdom, Strength and Hope. Each section contains full page photos of women from all over the world, of all ages and cultures. The placement of the photos is thoughtful, like the photo of a glorious smiling Dolly Parton holding a banjo (taken by Jodi Cobb in 1978) facing a photo of a Japanese woman singing and playing a samisen stringed instrument (taken by Eliza R. Scidmore in 1912). The comparison and contrast of an Australian Aborginal woman with a tradtional cermonial painted face (taken by Amy Toensing in 2012) with an Italian actress, her face veiled, taken backstage in 1994 by William Albert Allard) is amazing.

The joy of three women sharing a conversation inside a rickshaw in Bangalore, India (taken by William Albert Allard in 2004), school girl friends smoking cigarettes on a cruise down the Seine in Paris (taken by David Alan Harvey in 1989), and a group of women in London in 1966 holding up their compact mirrors to get a peek at Queen Elizabeth (photo by James P. Blair) highlight women in their everyday life.

There are photos of famous women- Amelia Earhart after she landed in Northern Island, surrounded by well-wishers, Italian astronaut Samantha Cristoforetti in her spacesuit,  journalist and civil rights activist Ida B. Wells- as well as interviews with such powerful women as Christiane Amanpour, Nancy Pelosi, Laura Bush and author Chimamanda Ngozi Adichie, talking about their successes, failures, and whom they admire.

One of National Geographic's most famous photos- "Afghan Girl", taken in a refugee camp in 1984 by Steve McCurry, highlighting Sharbat Gula's piercing green-eyed gaze is here, paired with a photo of Gula taken in 2002 by McCurry. Her eyes are still as piercing, and the effect of the photos side-by-side is dramatic.

Women- the National Geographic Image Collection is a brilliant look at women around the world, across the ages, in photos taken by the most creative photographers. It's a book to savor, and each time you open it up, you see something new that captures your attention. It would make a fantastic holiday gift for anyone's collection.

Thanks to TLC Tours for putting my on this tour. The rest of the stops are here: