Band of Sisters by Lauren Willig 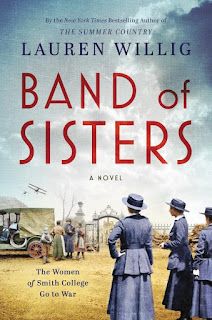 I enjoy historical fiction most when the story is one that I am unfamiliar with, and it is based on real people. In this vein, author Lauren Willig introduces the reader to The Smith College Relief Unit, a group of women from the Smith College in the United States who volunteered to go into the Somme in France during WWI, working to help French viilagers displaced during the war in her novel "Band of Sisters".
These young women, who didn't even have the right to vote yet, got on a ship to cross the Atlantic Ocean to go to a war zone, to help people they didn't know. Willig discovered this in a memoir titled "Ladies of Grecourt" by Ruth Gaines, a member of the unit. Then she found a cache of letters and journals written by the young women of the unit. Many of the stories in those letters ended up fictionalized in this fascinating novel that I could not put down.
I got so caught up in the individual stories of these interesting young woman, like Kate, the Irish young woman, a school teacher who was recruited by Emmie, her former roommate at Smith. Julia, Emmie's cousin, is a doctor with a serious demeanor. Mrs. Rutherford is the formidiable woman who was the driving force behind this enterprise.
Mrs. Rutherford told the ladies that they will be planting food, helping to build new shelters and schools, whatever was needed. The women drove huge trucks, learned how to give first aid, procured supplies by any means they could, and figured out how to get it to the people who needed it. They did all that and more in a time before Excel spreadsheets and Google docs, and did it in extremely uncomfortable clothing.
Willig drops the reader right into the war zone along with these brave, enterprising women. We see them at the best, working together to help people who were much worse off than they were led to believe, and at their worst, as close quarters during a crisis can cause some people's behavior to deteriorate.
When the war comes to their doorstep, the tension rachets up as the women work to save as many villagers as they can. I bit my nails to the quick as I was reading this section.
I also enjoyed the callback to the most recent novel by Lauren Willig, Beatriz Williams and Karen White, All The Ways We Said Goodbye, with a character and setting from that collaboration making an appearance here.
Readers of Jacqueline Winspear's Maisie Dobbs series should definitely put Band of Sisters on their TBR list and buy it now. I know so many women who would love this book. This is Lauren Willig's best book yet, I can't wait to see what research she stumbles upon for her next book.
My review of All the Ways We Said Goodbye is here.