The Consequences of Fear by Jacqueline Winspear 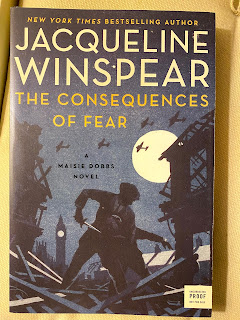 It's been two years since we had a Maisie Dobbs fix, as author Jacqueline Winspear published a memoir last year in place of her annual Maisie Dobbs historical mystery.
In  2019's The American Agent, London was dealing with the Blitz, the nightly bombing of London. Maisie and her best friend Priscilla drove an ambulance ferrying injured civilians, and Pris was seriously burned as they pulled injured children out of danger. One of Pris' sons was seriously injured during the evacuation of trapped troops in Dunkirk. It was a harrowing time for Maisie and company.
In the new novel, The Consequences of Fear,  private investigator and psychologist Maisie Dobbs has been pressed into service in the SOE (Special Operatives Executive) by her old comrade Robert McFarlane. She is tasked with psychologically evaluating people who will be sent into France as spies.
At the same time, her private investigation office has a new case- a young boy who has been acting as a messenger witnesses a murder but the police seem to be reluctant to admit that there was a murder. Maisie and her able assistant Billy Beale work to discover why and what connection it may have to the French resistance working in London.
Maisie's personal life has taken center stage in this novel. Her young adopted daughter Anna is growing very attached to Maisie and Maisie's father and stepmother, and Mark Scott, who works at the American embassy in London, has become an important part of Maisie's life. Is Maisie ready to let love back into her life after the tragic loss of her husband years ago?
The Consequences of Fear is vintage Maisie Dobbs. The juggling of her private investigation work and  confidential government work is becoming increasingly more difficult, and with the war ramping up in Europe, the next novels in the series are sure to examine that.
This is the 16th novel in the series, and not one that you can jump into without having background on Maisie Dobbs. Start at the beginning and you'll find Maisie's story as fascinating as I do. It's one of the only series that I have read every book, and it's a terrific series for high school age young women to read, as Maisie is a terrific role model. It's also a great Women's History Month read. Maise Dobbs fans will be pleased with this one.
My review of The American Agent is here.
My blog post about Jacqueline Winspear's visit to Barnes & Noble is here.