Her Dark Lies by J.T. Ellison 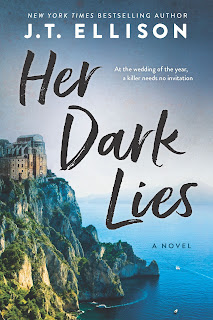 In J.T. Ellison's newest thriller, Her Dark Lies, Eliza, an emerging artist from Nashville is about to marry Jack Compton, the scion of a wealthy industrialist family. From the beginning of the festivities, things go wrong.
When Jack takes Eliza home from their engagement party the night before they leave Nashville to go to his family's remote private Italian island for the wedding, they are attacked by a masked intruder. Eliza shoots the intruder dead, but Jack convinces her to lie to the police and say that Jack's bodyguard killed the man.
Eliza hopes that once they get to the island, everything will be fine. She is bowled over by the beauty of the island and can't wait to paint there, her future home with her beloved. After her beautiful wedding gown is discovered defaced with the word "whore" written in blood on it, Eliza begins to wonder if her wedding is jinxed.
There is a lot going on this story, and people are hiding secrets and lies. Jack and his family's successful computer business is not exactly what it seems. And what is the true story behind the death of Jack's first wife on their honeymoon? Jack's parents have a strange reaction whenever her name is brought up.
Eliza is no Cinderella either, plucked from obscurity by the handsome prince. She was involved with some bad people in her younger days, and her sister blames Eliza for a car accident that killed their father.
As Eliza's family and other guests arrive for the week-long wedding celebration, the bodies begin to pile up. It has become clear that someone desperately wants to stop this wedding, and there are so many suspects and motives. Ellison puts lots of red herrings in the story that will test even the most clever sleuth to figure out exactly who is behind this and why.
Her Dark Lies has a mysterious island, power outages at the wrong time, a grandfather with dementia who yells out cryptic accusations of murder, family dysfunction, and a brunch filled with such delicious descriptions of food it would make Downton Abbey jealous. If Rebecca and the 1980's TV show Dynasty had a baby, it would be Her Dark Lies. Thriller fans will enjoy trying to figure it all out.
Thanks to Harlequin Books for putting me on J.T. Ellison's tour.